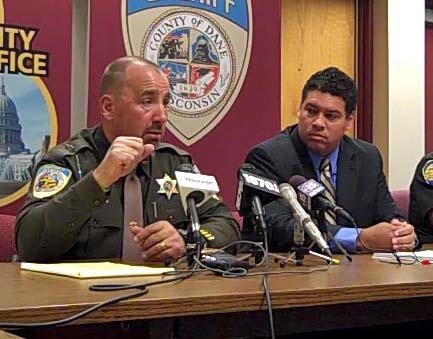 The Dane County district attorney has cleared a sheriff’s deputy in a fatal Town of Madison shooting. In a press conference Monday afternoon, Sheriff Dave Mahoney described a desperate struggle between Deputy Keith Severson and 25 year-old Eugene Walker, who was being sought in connection with an incident in Fitchburg earlier that evening. Walker, who’d been released from the state prison at Sturtevant on September 23rd, had reportedly held a gun to the head of his ex-girlfriend. Severson, who was assisting Fitchbrug officers in trying to locate Walker, was forced to act in a matter of seconds the night of October 12, when Walker, after refusing to obey his orders, charged and tackled Severson, pinned his arms to the ground and began striking him. “There was no doubt in his (Severson’s) mind because he (Walker) had mentioned to others who relayed it to law enforcement, that he wasn’t going back to jail or prison under any circumstances,” said Mahoney.

Walker, said Dane County District Attorney Ismael Ozanne, had made communications and statements to family members and the ex-girlfreind who he’d threatened, “regarding his state of mind and the motive of trying to force law enforcement to take his life.” Mahoney said Walker had a propensity for violence which he’d shown earlier that evening when he forced his way into the ex-girlfreind’s home, putting the gun to her head, “as well as texting her that he intended to die that evening.” Severson, who’s currently on leave during the investigation, fired seven shots, at least six of which struck Walker. D.A. Ozanne has determined there is no criminal liability in Walker’s death.