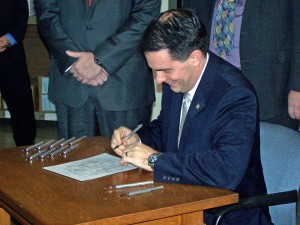 Lawmakers have been quick to act on a special session on job creation called by Governor Scott Walker, allowing the Republican to sign his first bill just three weeks after taking office.

Walker says the proposal is just one part of his plan to help lower the overall tax burden on businesses, which will hopefully encourage them to create more jobs in the state. He says it could help reduce health care costs and be part of an effort to get the economy moving again.

Only about 1.3-percent of taxpayers in the state claimed the federal tax deduction for HSAs in 2008. Allowing them to claim it in Wisconsin is expected to cost the state about $49 million over the next two years.

Governor Walker signed the bill Monday afternoon at EVCO Plastics in DeForest, just outside of Madison.