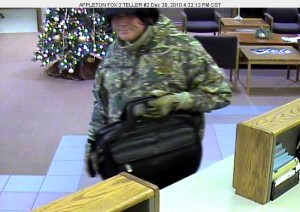 Fond du Lac police are working with police in Grand Chute, and the FBI on the possibility that the same bank robber victimized both communities over the later part of last month.

The American Bank was robbed in Fond du Lac on December 20th and an Anchor Bank in Grand Chute on December 30th. Fond du Lac Police Captain Steve Klein says there appear to be similarities in both robberies. He says it’s unusual for the city to have that type of robbery.

Klein says clear video footage and witness description are reasons they believe the same robber hit the Fond du Lac bank. In both robberies the suspect is said to be about 6 feet tall caucasian man, wearing a long dark wig and dark colored baseball cap. He also was wearing a camouflage jacket.