You are here: Home / Crime / Courts / Reunion with dog opens up sinister theory 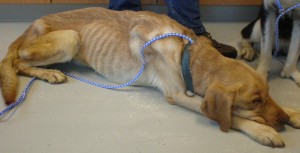 Just a few days before Christmas, an animal control officer from the Humane Society of Portage County responded to a call of two dogs wandering down a country road. One of them was a shepherd mix with a deformed left foot likely from birth. The other was a severely malnourished yellow lab. “He was just skin over bones,” says Shelter Director Jennifer Blum.

Both dogs were checked for microchipping and the lab was traced back to a nearby family who said he went missing three years ago.  The family came in the next day to pick up their dog which Blum says was a tearful moment.

“The first thing that the owner said was, ‘Oh my God Jack it’s really you.’ The second thing she said was, ‘Who could’ve done this to you?”

A veterinarian checked out Jack. Despite having been starved his organs seemed fine and is on the road to recovery.

The family last saw their pet when he was let out to go to the bathroom. It’s believed the dog was stolen and mistreated. Blum is hoping anyone with information about this potential crime will come forward. From their behavior it was obvious the two canines came from the same home.

Blum credits Jack’s reunion due to the rightful owners’ decision to microchip and calls the procedure the most cost effective way to find a lost dog.

Meanwhile Jack’s friend is doing well. Shelter workers named her Cindy Lou Who, due to her likeness with the Dr. Seuss character. She is well behaved and available for adoption.