You are here: Home / Politics / Govt / Capitol protestors allowed to stay another night 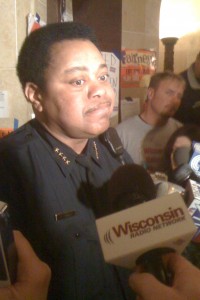 State Capitol Police announced Sunday night protestors would be allowed to stay in the building overnight. Sunday was to be the day protestors were going to be cleared out. Officials earlier in the week had announced at 4 p.m. the building would resume normal business hours meaning those inside could be ejected.

With the deadline approaching, people at 3 p.m rallied around entrances as police were allowing access “one in, one out.” Chants of, “whose house, our house,” could be heard, along with, “Let us in, let us in!”

Inside the capitol at 3:50, a protestor over a bullhorn announced those wishing to remain in the building should go up to the first floor, while the others who will freely exit upon law enforcement’s orders, should be on the ground floor.

Four o’ clock came and went.  For the next several hours the people went about their business including chanting, dancing, sitting and even sleeping.

A protestor collecting signatures for a GOP lawmaker recall effort had no problem risking arrest to take a stand. “Others did before, if people hadn’t risked their safety they would still be slavery, they’re be lots of other things,” says Lauren Pine of Portage.

A Madison woman says they’re movement is galvanized and will keep fighting, “Regardless of what happens today the battle against this bill is not over.”

The budget repair bill is facing opposition due to its restrictions on collective bargaining rights for most public workers. The measure faced a marathon session in the Assembly but was eventually voted rapidly in by Republicans. Among the outspoken opponents during the process was State Representative Kelda Helen Roys (D-Madison) who was among protestors Sunday night.

She says there is no reason to arrest the people who are peacably assembling. She also praises the behavior of both police and protestors in recent weeks which has led to only a handful of arrests.

In the end it was a victory for the protestors, as around 7 p.m it was announced that protestors would be allowed to stay overnight. Capitol Police Chief Charles Tubbs made the decision as numerous people had voluntarily been leaving the building and others requested to stay.  As to the policy of the overnight hours this week, Tubbs says it’s a day-to-day decision.

The Department of Administration estimates 4,000 people were in the building during the day but the agency did not know how many remained after four o’clock.