You are here: Home / Packers / Harlan is responsible for some of Packers success 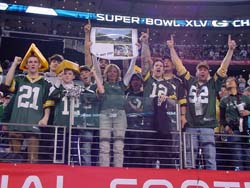 straight Super Bowls and won the first in 1996.

Harlan said this Super Bowl victory is as gratifying as the one after the 1996 season, because he hired Ted Thompson as well.

Thompson wasn’t the popular choice amongst the fans as General Manager and Harlan said he’s happy to see the Packers achieve the ultimate goal under Thompson.

Harlan said he received a lot of calls from fans voicing their displeasure over the G.M. hire and his response was this.

Many around the league feel that the Packers, under Thompson, could be set up to get several more opportunities to add to their total of four Super Bowl victories.