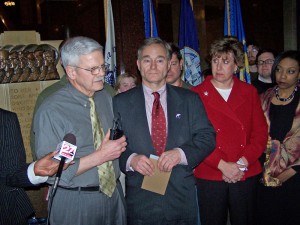 Democrats meet with protestors spending the night in the rotunda. (PHOTO: WRN)

Despite having hundreds of people still wanting to speak on the Governor’s budget repair bill, the Legislature’s Finance Committee wrapped up its public hearing at three this morning.

The decision came after lawmakers heard nearly 16 hours of testimony, with the majority speaking against limits on collective bargaining rights for public employees and requiring them to make larger contributions to pensions and benefits.

JFC co-chair Robin Vos (R-Burlington) says lawmakers went out of their way to let people speak and they heard a wide range of emotional testimony from people who waited hours for their two minutes before the committee. However, Vos says many of the stories they were hearing had started to repeat and he questioned if members were getting any new information.

He also expressed concerns that about 75-percent of those testifying during the late hours were from Dane County. Vos says lawmakers represent many parts of the state, so he wanted to make sure members have time to communicate with citizens in their own districts before the committee acts on the bill.

State Senator Bob Jauch (D-Poplar) was among Democrats who blasted the decision to end early, saying everyone should be given a chance to speak. Jauch says Democracy is not on a time clock.

Democrats left the hearing room and went to the rotunda to meet with hundreds of protestors who had camped out overnight, many of them UW students, as they waited for a chance to speak on the bill. Jauch called the moment the “rebirth of the progressive movement in Wisconsin.”

Democrats on the Finance Committee continued to accept testimony from the public in another room at the Capitol after the main hearing had ended.

The Finance Committee is scheduled to reconvene in executive session at noon to vote on the bill, with amendments possibly being introduced and adopted. Votes in the Senate and Assembly are expected as early as Thursday.