You are here: Home / Legislature / Legislative delays continue at the Capitol 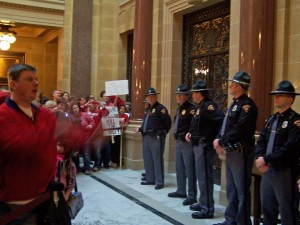 As protestors flooded the Capitol for another day of demonstrations, lawmakers tried to return to the floor to take up the Governor’s budget repair bill.

In the Senate, Democrats did not show up again for the second day, prompting a call of the house from President Mike Ellis (R-Neenah). State troopers were sent to the Monona home of Minority Leader Mark Miller (D-Monona), but returned to the Capitol after no one answered the door.

Senate Democrats remain out of state in protest of the Governor’s budget repair bill. They say it’s also a sign of support for the thousands who have converged on the Capitol this week to protest the bill and the limits it places on the collective bargaining rights of public employees.

Meanwhile, the Assembly did come to the floor as scheduled this morning. Republicans attempted to bring their version of the bill out for a vote, but Democrats used constituent introductions as a stalling tactic to prevent debate.

The Assembly Speaker has indicated he wants the chamber to vote on the bill today, but Barca says Democrats stand ready to keep that from happening. He says they are working on amendments for when it reaches the floor for debate.

Out in the Capitol rotunda and around the square, thousands of demonstrators filed in early this morning for another day of protest rallies. National labor leaders have joined them in support and TEA Party demonstrators are expected to hold a counter-protest at the Capitol on Saturday afternoon.