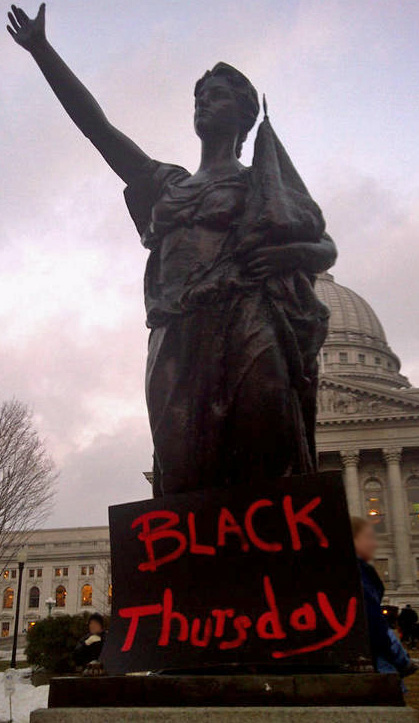 Democrats in the Wisconsin state Senate did not show up for work Thursday, and law enforcement is looking for them. The Senate was scheduled to be the first chamber to take up Governor Scott Walker’s controversial budget repair bill, but when Senate President Mike Ellis called the roll, none of the Democrats took the floor. Senate Majority Leader Scott Fitzgerald spoke to reporters. “I’m not sure where the Democrat Senators are. I have had no contact from the minority leader,” said Fitzgerald. “We right now have law enforcement that are out there looking for Democrat Senators, to try and have some of them come back to the chamber, so that we can move forward with final passage.”

The state Capitol was jammed with thousands of union members and their supporters, the fourth day of protests over provisions of Walker bill which would eliminate the ability of public employee unions to negotiate for their pensions and health care benefits.

The drama in the Senate played out against the backdrop of a fourth day of protests at the Capitol, with thousands of chanting people in the building. Fitzgerald said Minority Leader Mark Miller did not inform him of any plans by his 14 members to not show up. “I saw Senator Miller in the hallway this week, but nothing formally beyond that. He didn’t reach out to me . . . he didn’t ask for more time, none of that.”

State Senator Jon Erpenbach (D-Waunakee) said Democrat members are not in the state. “We’re not in Wisconsin right now,” said Erpenbach. “We got together and we met outside the Capitol this morning, we talked about the options that we had to slow things down a little bit. The bill was introduced last Friday and they want us to vote on it today.”

Erpenbach said this is not a high school prank and they are very serious about their reasons for leaving. “The legislation itself has sweeping changes in it. Some people are aware certianly of the collective barganing language, but there’s also a gubernatorial takeover of the Medicare programs like SeniorCare and BadgerCare,” said Erpenbach. “I know there’s a lot of senior citizens that, if they knew that, would be pretty concerned about what the governor wants to do with SeniorCare.”

Late Thursday afternoon, WTMJ TV in Milwaukee reported that the missing Senators had been located at the Clock Tower Resort in Rockford, Illinois.