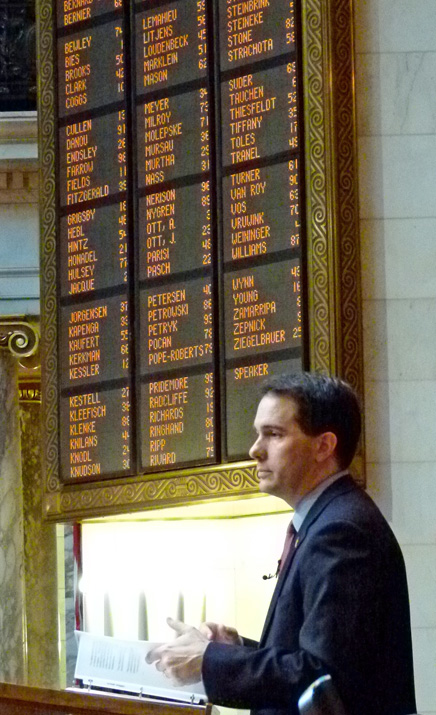 Governor Scott Walker’s budget plan cuts Wisconsin’s state deficit – at a sharp cost to schools and local governments. “I’ve often repeated references to our state’s constitutional lesson, that it is through frugality and moderation in government, that we will see freedom and prosperity for our people,” Walker said as he delivered his prepared remarks to a joint session of the legislature. “Our budget holds true to these principles, by balancing the $3.6 billion deficit through permanent spending reductions and innovative government reforms.” Walker said his two year spending plan, which makes dramatic cuts in state aid to education and local governments, also reduces the state’s structural deficit. “Our budget reduces all funds spending by $4.2 billion, or 6.7 percent, and decreases the structural deficit by 90 percent, from $2.5 billion to $2.5 million, the lowest structural deficit in history,” said Walker.

The budget reduces state aids to schools by $834 million over the next two years, while reducing the amount local school districts can raise through the property tax by 5.5 percent. Shared revenues to local counties and municipalities is reduced by $96 million. Walker said the reduction in aid to schools and local governments can be offset, but only if his budget repair bill is passed. “If the 14 Senate Democrats do not come home, their local communities will be forced to manage these reductions in aid, without the benefit of the tools provided in the repair bill,” he said. Walker said if the Senate Democrats, who fled nearly two weeks ago, do not return for a vote, “thousands of teachers will be laid off.” Walker’s budget repair bill has been the focus of protests in and around the state Capitol since it was introduced two weeks ago. Thousands of public employee union members and their supporters have rallied in opposition to provisions of the bill which would radically redefine the ability of those workers to collectively bargain.

In addition to the cuts to K-12 education and local units of government, Walker’s budget would strip $250 million in state aid to the University of Wisconsin-Madison, while creating an independent authority to oversee the Madison campus, which would be separated from the rest of the UW System. There is also $250,000 to develop a similar scheme for the UW System’s second largest campus at UW-Milwaukee.

Walker’s budget also addresses the growth of the state’s Medicaid programs. “Coupled with the use of $1.2 billion in one time federal funding, the state is facing an unsustainable budget challenge, a challenge in need of a serious and long term solution.” said Walker. “That will mean asking some individuals to pay modest co-pays and premiums, as they transition from the safety net that those programs provide, to gainful employment.” The state’s Medicaid programs include SeniorCare, BadgerCare and FamilyCare.