You are here: Home / Politics / Govt / Bringing bicycles to the Capitol 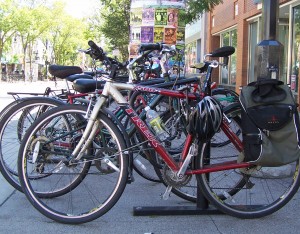 The bicycle lobby is in Madison today. It’s the Bicycle Federation of Wisconsin’s Bike Summit, and bicycle backers will be bending the ears of lawmakers at the Capitol. “We feel that bicycling is an important investment in our state,” says Bike Fed Associate Director Amanda White. “It’s good for our economy, and of course bicycling is good for our health, too.” The Bicycle Federation’s legislative agenda includes restoring $5 million or bicycle and pedestrian facilities which is slated for elimination in the budget, increased penalties for injuring vulnerable road users like cyclists, and allowing bicycle use within Stewardship lands. White says gas prices help with the message that bikes belong. “People definitely tend to look more at alternatives like bicycles when gas prices rise.”

This year’s keynote speaker heads the bicycle program in Copenhagen, Denmark, which is billed as the planet’s best bike city, and where forty percent of trips are made by bicycle.