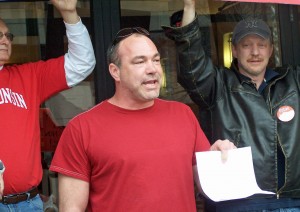 Organizers have turned in their petitions to recall another Republican state Senator. About 25,000 petition signatures were brought to the Government Accountability Board in Madison Thursday afternoon by a group working to remove Senator Randy Hopper from office.

The Fond du Lac Republican is being targeted because of his vote in favor of a bill stripping public workers of collective bargaining rights.

Organizer Scott Dillman says they only needed a little over 15,000 signatures to trigger the recall. He says the number they gathered should send a message that the Senator failed to recognize what his constituents actually wanted him to do.

Hopper is the second Republican lawmaker to have a petition turned in against him. Last week, a group submitted signatures to recall Senator Dan Kapanke of La Crosse. Other efforts are still active across the state against six more Republican and eight Democratic Senators.