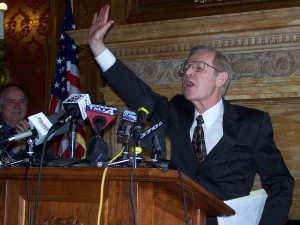 Almost two weeks after the election, State Supreme Court Justice David Prosser is declaring victory in his reelection bid.  County vote totals turned in last week give Prosser a 7,316 vote lead over challenger JoAnne Kloppenburg, in a race that had initially been too close to call. Now that all 72 counties have their results turned in, Prosser says the result of the race is no longer in doubt.

Prosser met with reporters Monday afternoon to give a victory speech he had to put on hold on election night, when just a few hundred votes separated the candidates.

He criticized outside groups that launched vicious attacks against him during the campaign. However, he says the blowback from that advertising blitz may have helped him win, since the people of Wisconsin are “too smart and far too decent to base their votes on personal smears.”

Prosser says it was a decisive election about judicial independence, which made people realize that judges should be much more than partisan politicians in black robes.

The close margin in the race is still small enough for Kloppenburg to request a recount, with local governments covering the cost. She has until Wednesday to decide whether to ask for one.

Prosser’s campaign says the move would be a waste of money and is pledging to file a legal challenge against any requested recount.