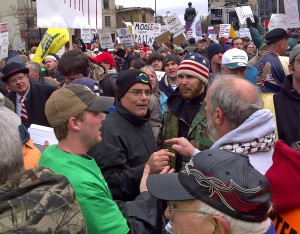 Sarah Palin praised the Tea Party, Governor Scott Walker and Representative Paul Ryan during a stop in Madison. But counter protesters were out in force on the Capitol Square Saturday, voicing their opposition to Walker’s policies and the former Alaska governor’s appearance. Madison police estimated the total size of Saturday’s crowd at some 6,500, and said it was impossible to determine numbers attending the separate events. While the counter protest took place on the opposite side of the Capitol building from the Tea Party rally, large numbers of counter protesters made their way around, and made their voices heard. In some cases, they mingled with Tea Partiers and argued with them. The counter protesters drew the ire of Andrew Breitbart, a conservative pundit who spoke just before Palin. “Go to hell. Go to hell,” said Breitbart. “You’ve been so rude. You’re trying to divide America. Class warfare is not American.”

Palin, the former Alaska governor and presumed contender for her party’s 2012 presidential nomination took a shot at the “GOP establishment” in Washington for capitulating to Democrats on federal spending. References to the Packers and Badgers have become obligatory during Wisconsin political events, and Palin suggested Republican leaders in D.C. could learn how to “fight like a girl” from members of the Badger women’s hockey team. Palin, directing her comments to the counter protesters, said “a pension is a promise that must be kept,” and that she was speaking as the daughter of teachers and wife of a union member. “Governor Scott Walker understands this,” said Palin. “He understands that states must be solvent in order to keep their promises, and that’s what he’s trying to do. He’s not trying to hurt union members. Hey folks, he’s trying to save your jobs and your pensions.”

But Palin’s perspective on Madison’s pro-union protests didn’t appear to match reality. She referred to “obstruction and destruction” by the opponents of Walker’s efforts to strip collective bargaining rights from public employees. “You saw these violent rent-a-mobs trash your Capitol and vandalize businesses,” said Palin, without elaborating. While the Capitol and surrounding grounds have been impacted by weeks of protesting, Madison police have not reported any significant vandalism to businesses attributable to the protests.

Palin also criticized President Barack Obama on the issue of federal spending and the deficit. “When Wisconsin’s own Paul Ryan presented a plan for fiscal reform, what was Obama’s response? He demonized the voices of responsibility with class warfare and with fearmongering.” Palin praised supporters of Governor Walker and members of the Tea Party in Wisconsin. “You defended the 2010 electoral mandate. You are heroes. You are patriots. And when the history of this Tea Party movement is written, what you accomplished here will not be forgotten”

The counter rally was held on the State Street side of the Capitol. Josh Healey, a UW Madison graduate and self proclaimed Badger poet, read a poem he wrote for Palin. “This is Wisconsin. There are no palm trees on State Street, and we don’t drink that kind of tea around here,” said Healey. Many held signs, some reading “Walker, pull a Palin and quit.” Madison police reported just one arrest Saturday, for disorderly conduct.