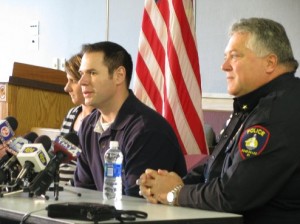 Physically, Fond du Lac Police Officer Ryan Williams and his K-9 partner Grendel aren’t ready yet to return to duty after being critically wounded last mont hin a shooting incident that claimed the life fellow officer Craig Birkholz. But they are making a rapid recovery and are raring to go.

Williams was shot twice during a standoff with a Fond du Lac man on March 20th and Grendel was shot once. Williams says he had to run to an ambulance while bleeding heavily into his lungs. The ambulance had started moving to get away from the shooter.

He says the support from everyone has helped greatly in his recovery. Williams says he wasn’t afraid of dying, but he just wanted a chance to fight for his life. Williams says he feels blessed for every day he’s had since the shooting.

An investigation into the shooting continues, but Williams says nothing could have been done differently and a lot of people had a role in saving his life.