You are here: Home / Sports / Bucks hoping to get lucky in Draft Lottery 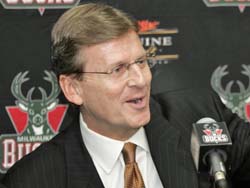 No. 10 spot to the No. 1 overall pick since the weighted draft lottery system began in 1990.

A total of 14 teams will have a shot at the No. 1 pick, with the Minnesota Timberwolves having the best chance (25%).  The Bucks have only a 1.1% chance of grabbing the top pick and nearly a 4% chance of moving into the top three spots.

The Bucks could also move backwards, as far down as number 13.