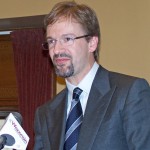 Madison Mayor Paul Soglin says riding the bus doesn’t just benefit riders. “Every time a bus goes by, that could be another 40 or 60 automobiles slowing up yours. That could be the difficulty and the challenge that we face, finding a parking space,” said Soglin. The mayor spoke at a Capitol press conference on Tuesday. With the budget writing Joint Finance Committee expected to approve ten percent cuts in funding for local transit, local officials like Soglin are hoping cooler heads prevail. “It’s hard to believe after Wisconsin’s been a leader for so many decades, that the partnership between the state and its local communities in insuring accessible transportation is in jeopardy,” he said.

Milwaukee County Executive Chris Abele proposed a solution. “The Legislative Fiscal Bureau estimates that the Transportation Fund will have a surplus of $28 million,” said Abele. “Half of that surplus restored to transit would mean no cuts to transit for the state for the length of the biennial budget.” That proposal was contained in a letter to budget panel co-chairs, Representative Robin Vos and Senator Alberta Darling. The finance committee is expected to act on the transit portion of the budget on Thursday. Abele said 36,000 Milwaukee residents rely on the bus every day.

Nino Amato with the Coalition of Wisconsin Aging Groups called the transit cuts penny wise and pound foolish. “But it also has a more serious component, and that is the importance to keep job retention in the state,” said Amato. “You’ll create more jobs in the long run through job retention than you can in attracting jobs. Without public transit, you’re going to slow the economy.”