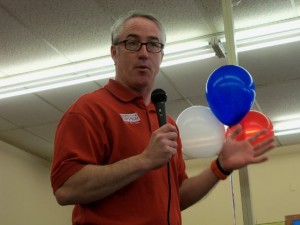 The 18th District Senator told a gathering of more than 100 volunteers the state budget repair bill was about restoring “fiscal sanity.”

Hopper’s campaign manager, Jeff Harvey, says Hopper’s supporters have a lot of reasons to be upset. He includes “abuse of the recall process” by trying to oust lawmakers over a vote, and Democratic lawmakers who left the state to delay the bill’s vote.

Hopper was pleased to see the turnout for the launch Saturday. Hopper’s announced Democratic opponent is Oshkosh attorney Jessica King who also faced him in the 2008 election.