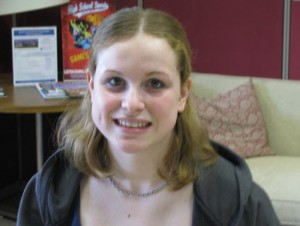 Recently graduated from college, a 21-year-old Fond du Lac woman begins what will be a life-long animal advocacy effort. Jeanna Giese was bitten by a bat during a church service when she was 15-years-old and made headlines worldwide by being the first person ever to survive without receiving a vaccine. Her survival was thanks to a medically induced coma and chemical cocktail.

Giese remains in touch with the doctor who helped save her life. He was at Lakeland College in Sheboygan when she graduated May 8th.

Jeanna majored in biology in college and animal-related science courses. She works part-time now for a dog boarding facility, but wants a full-time job where she can continue to work with animals.

She also plans to do public speaking about rabies awareness. Giese says there’s a lot of wrong information out there about rabies and the animals that can carry it.

Her story was recently the focus of Animal Planets “I’m Alive” show. Giese did interviews for it and what happened to her was reenacted. She says they did an excellent job, but got a few minor details wrong that only she could pick out because she went through the whole experience.

Giese has pets of her own; seven chickens she rescued from a school experiment, a rescued dwarf rabbit and a two-and-a-half-year-old Husky appropriately named Mayah, which in Hebrew means “close to God.”