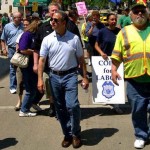 Former Senator Russ Feingold surprised union members at a Capitol Square rally Monday. No word on any political plans, Feingold’s focus was on Governor Scott Walker’s two year state budget and the drastic curtailment of collective bargaining for most public workers passed by Republicans in the legislature. “The first way they did it was illegal, I think, against the state’s open meetings law” Feingold said, referring to the disputed action taken by a legislative committee in March. “Now they’re going to try to do this again, claiming that this is somehow a budget issue, even though this has been completely discredited. I’ve fought a lot of state budgets here, but this kind of game is something I’ve never seen played in this state.”

Feingold’s comments came as the state Supreme Court listened to arguments about whether the collective bargaining law was improperly forwarded to a vote in the state Senate in March, in violation of the open meetings law. “Clearly they should strike it down, otherwise our open meetings law means nothing,” said Feingold, who briefly joined hundreds of union members and their supporters as they marched around the Capitol Square, site of the ‘Walkerville’ tent encampment which organizers plan to have in place until the end of the budget process.