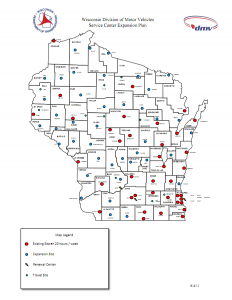 The state is backing off of a plan to close several Division of Motor Vehicles service centers across Wisconsin.  The original proposal from the agency would have shutdown service centers in 16 counties, which attracted heavy criticism from state lawmakers. Department of Transportation Secretary Mark Gottlieb says that forced them to reanalyze the proposal and resulted in a new plan that keeps all current centers open.

The proposal released Thursday opens new DMV service centers in Vernon, Buffalo, Eau Claire, and Menominee Counties. It also adds hours at dozens of locations, resulting in about 620 hours of extra counter service at centers across the state.

The expanded hours are needed to comply with a provision in the Voter ID law passed by the Legislature earlier this year. The law requires each county in the state to have a service center that’s open at least 20 hours a week so people who need a photo ID card to vote can obtain one.

State Representative Andy Jorgensen (D-Fort Atkinson), who was a major critic of the original plan, says the DOT did the right thing by keeping a center open in his hometown of Fort Atkinson. The old plan would have shifted those hours north to Watertown, which Jorgensen argued would have made it very difficult for thousands of people in his district to obtain an ID card.

Jorgensen believes the political backlash prompted the DOT to keep those centers open.

The DMV hopes to have all of the changes in place and new centers opened by January.