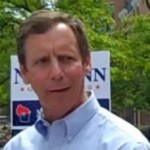 The first official candidate is in the race for the U.S. Senate seat being vacated by Herb Kohl. He’s former congressman Mark Neumann, a businessman who also sought the Republican nomination for governor, which he lost to Scott Walker. Neumann said hopes to address the nation’s fiscal challenges. “When I look at the problems facing America today, and the threat to our future, and the fear that I see of people around me, I know we need a definitive plan to balance the budget and bring jobs back to our country, and that’s what my candidacy will be about,” Neaumann said.

Neumann, who served four years in Congress before an unsuccessful bid for the Senate against Russ Feingold in 1998, said balancing the federal budget is crucial — and he will work for a constitutional amendment to do that. “I cosponsored it when I was in Congress twelve years ago, and I will work very hard for it to happen again,” he said. “I’ve got 25 years in business, and there’s just a really simple principle that government does not get, and it’s why we need business people in government: you can’t spend more money than you have.”

Neumann said he has the greatest respect for former governor Tommy Thompson, who is considering entering the race, and that he’ll be angling his campaign towards the presumed Democratic candidate, congresswoman Tammy Baldwin of Madison.