You are here: Home / Agriculture / Eyes on Taiwan trade 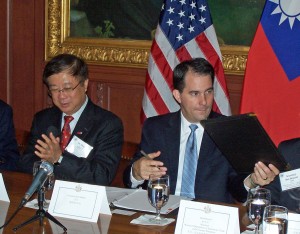 Wisconsin is increasing its agricultural trade with Taiwan. That growing trade in two key agricultural commodities — corn and soybeans — was cemented by the goodwill visit of a Taiwanese trade delegation to Madison. Governor Scott Walker noted the trade through Wisconsin’s Great Lakes ports has been beneficial for both partners. “Taiwan is our number one export partner in corn, our number four export partner in soybeans,” said Walker. “We’d like to see that grow, and we’ve seen significant growth between 2009 and 2010.”

In fact, the head of the Taiwanese delegation, Doctor Bo-Ji Chen, said Taiwan increased imports of agriculture products from Wisconsin by more than forty percent last year — and noted there’s not a lot of land for agriculture in the island nation. “We have the second highest population density in the world, so we have not much land to grow corn and soybeans,” he said. “We have to get our feed sources through reliable partners.”

One of the Wisconsin agriculture firms to benefit from the Taiwan trade is the DeLong Company of Clinton. Bo DeLong said it’s been a story of quantity — and quality. “It depends on the crop year obviously, but the Taiwanese have been very happy with the products that we’ve given them out of Wisconsin,” DeLong said. “We’ve had very few complaints, and they’ve continued to come back and buy our products.”

Most of the Wisconsin commodities go to livestock feed, including to Taiwan’s dairy industry — although Chen said Wisconsin cheesemakers have nothing to worry about on that front.