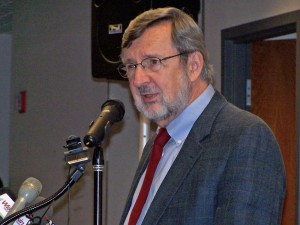 As Democrats prepare for an attempt to recall Governor Scott Walker from office, party leaders considered to be possible challengers are helping to rally volunteers. In less than three weeks, opponents of Governor Walker will start fanning out across the state to collect signatures on recall petitions.

During a training session in Madison Tuesday, former Congressman Dave Obey urged volunteers to help push back the Walker agenda and the divisive politics he has brought to the state.

Obey says Walker “has a chip on his should half a mile high, and it’s about time Wisconsin voters knock it off.”

Also speaking to volunteers was state Senator Jon Erpenbach (D-Middleton), who said Walker has “divided the state beyond belief” and it’s the most irresponsible thing he’s ever seen an elected official do.

The Middleton Democrat says many people doubt volunteers will be able to collect the over 540,000 signatures needed to recall the governor. However, he believes they will be able to go well beyond that and gather at least 700,000.

Speaking to volunteers, former Dane County Executive Kathleen Falk said Walker started a relentless attack in January against the values of Wisconsin. She says Walker has pitted families and neighbors against each other and now is the time to take back the state.

Recall organizers plan to start circulating petitions November 15th. They will have 60 days to collect the signatures needed to recall the governor.