You are here: Home / News / Fitzgerald in U.S. Senate race 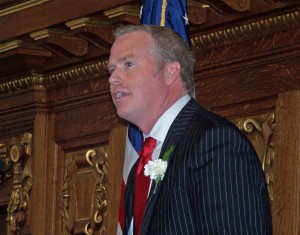 There’s another candidate in the race for U.S. Senate. The Speaker of the Wisconsin Assembly says he’s familiar with the concerns of voters statewide — that’s why he’s entered the field of GOP Senate candidates. “They are very frustrated and concerned about their children’s future and their own future, and they’re not going to accept the status quo,” said Fitzgerald.

Fitzgerald says he’s “been on the front lines” trying to reform government in Wisconsin. “I think that’s what people are looking for. They’re looking for leadership. We have to have adult conversations when it comes to this country, and that’s what we did. We made the tough choices, and I was the person and the speaker who delivered on what we said we would do.”

Fitzgerald has been Speaker of the Assembly since the start of the current legislative session and has been instrumental in moving Governor Scott Walker’s agenda forward. He joins former congressman Mark Neumann as an official candidate for the seat being vacated by Democrat Herb Kohl. Former Governor Tommy Thompson and state Senator Frank Lasee have formed fundraising committees but a not yet fully in the race. Congresswoman Tammy Baldwin is thus far the only announced Democrat. “What you see is what you get. I’m the candidate who can deliver,” said Fitzgerald. “We people with more political courage who aren’t worried about their next election but are worried more about the next generation.”

“I respect Speaker Fitzgerald and his dozen years of work in the state Legislature. But my campaign is focused on solving America’s debt crisis, balancing the budget and repealing Obamacare,” said a statement from Neumann. “This race is about choices. Tammy Baldwin is the most liberal member of Congress. I’m Wisconsin’s most conservative Congressman in the last 30 years. It’s as simple as that. ”

Brad Courtney, Chairman of the Republican Party of Wisconsin, also issued a statement. “With today’s announcement by Speaker Jeff Fitzgerald, yet another serious leader focused on job creation has joined Wisconsin’s Republican primary field for the 2012 U.S. Senate race. While Democrat Tammy Baldwin continues to call for more big government spending programs, Wisconsin voters can be confident that they will have an opportunity next year to choose between several impressive Republican candidates who will fight to put our nation’s economy back on track.”

Fitzgerald’s announcement comes on the same day that groups affiliated with Wisconsin Democrats planned to announce their effort to recall Walker. “On the day that Wisconsin is learning of the imminent recall of radical Governor Scott Walker, his willing crony Jeff Fitzgerald has inserted himself in that storyline,” said a statement from Democratic Party of Wisconsin Chair Mike Tate. “Along with his brother, Fitzgerald has been an unquestioning tool of Walker’s corporate power grab in this state, which has focused on favors for the very rich at the same time services for the middle class have been torn to shreds or turned over outright for the profit of special interests. The idea that Fitzgerald would carry Scott Walker’s corporate banner to Washington should add fuel to the forces of change that are about to sweep over the state.”