You are here: Home / Brewers / Hairston remains steady for Brewers 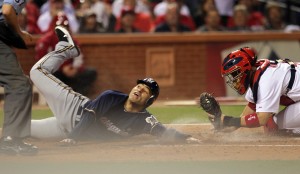 McGehee plenty of opportunity to shake out of his season long slump.  When it didn’t happen, Roenicke went to veteran Jerry Hairston Jr. at third base and Hairston hasn’t disappointed.

The Brewers new third baseman went 2 for 4 last night with a pair of doubles, a rbi and a key run scored in the Milwaukee Brewers 4-2 victory over the St. Louis Cardinals.

Hairston’s run tied the game 2-2 in the 4th and he had to go head first, around catcher Yadier Molina to score.

AUDIO: Hairston on his slide to score games second run :20

Hairston is hitting .375 in 9 postseason games, with six runs scored, four rbi’s and three walks.  Hairston said the key to his and the team’s success has to do with playing loose.

Hairston is just another in the line of players that general manager Doug Melvin has acquired to help the Brewers get where they are today.