You are here: Home / Fires/Accidents/Disasters / Woman injured while trying to shoot squirrel 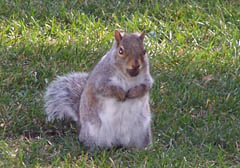 In the northwest Racine County Town of Waterford, police were called to a home about a woman with a “squirrely” gunshot wound to the foot. It was a shotgun injury, caused by the 56-year-old victim having her finger on the trigger as she walked with a .410 gauge toward her front yard to go after a squirrel.

The injury to her right foot was serious enough that it warranted a “Flight For Life” trip from Memorial Hospital in Burlington to Froedtert Hospital in Wauwatosa.

To make things even worse, Waterford Police say the victim was technically hunting. While she has a small game license, the law does not allow the discharging of firearms within the residential areas of Waterford.

The DNR is also investigating the incident.