You are here: Home / Badgers / Badgers 1-win away from Big Ten title game

It didn’t come easy, but the 15th ranked Wisconsin Badgers eventually pulled away for a 28-17 Big Ten Conference road win over 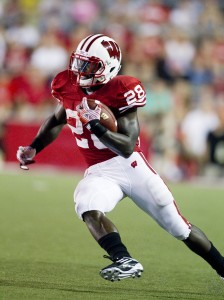 Wisconsin fell behind 14-0 in the second quarter, but the Badgers climbed back to pull out the win, their 9th (9-2) of the season.  Wisconsin is 5-2 in the Leaders Division and will host Penn State (6-1) next Saturday with a trip to the Big Ten Championship game going to the winner.

Ball also scored a pair of touchdowns to give him 30 for the season.  He becomes just the 5th player in Football Bowl Subdivision history to score at least 30 in a season.  He’s also the reason why the Badgers are playing in the Big Ten title game next week.  In the last three Badgers wins, Ball has rushed for 613 yards and 7 touchdowns.