You are here: Home / News / New ad campaign takes a stab at bed-sharing 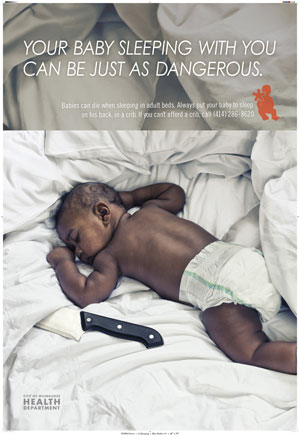 The city of Milwaukee is beefing up its effort to reduce infant deaths. The city’s Health Department has a new advertising campaign showing images of babies sleeping with butcher knives, with a caption saying it can be “just as dangerous” as an adult sleeping with a newborn.

Anna Benton is the Department’s director of family and community health. “We wanted to go this far in order to really raise the dialogue and I think we certainly succeeded in that; this has hit the national news. People across the nation are talking about these ads and there will be various opinions about whether or not it goes too far.”

Ten infants are killed every year in Milwaukee as a result of bed-sharing, according to Milwaukee Health Department. Benton says they don’t use the word “co-sleeping” in their campaigns, which can mean either “bed-sharing,” which is bad or “room-sharing” with their parents — which is recommended. Milwaukee’s goal is to reduce the overall infant mortality rate by at least 10 percent by 2017.

Why not 100 percent? Benton says, “Of course in an ideal world, yes, we would reduce all of these deaths; we would eliminate all infant mortality, but we wanted to set a reasonable, achievable goal.”

Benton explains for safe sleeping, a baby should be put on its back in an empty crib with no soft items like pillows and fluffy toys and comforters around them. Like the images or not, she says they’ve succeeded in getting people to talk about the issue. “We have certainly called attention to it, yes; we are fielding phone calls right and left from across the nation and actually internationally, as well.” She says they are getting reaction for supporters of the ad and those who are offended by it.

Milwaukee Mayor Tom Barrett says he’s OK with the national backlash to the ad. In his words, “We want people to think about this.”

The ads are on billboards across Milwaukee.