You are here: Home / News / Walker focused on jobs, not recall (AUDIO) 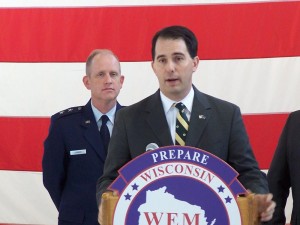 As a statewide recall effort gets underway today, Governor Scott Walker says he plans to continue working on his goal of helping the state create 250,000 jobs during his first term in office.

Opponents of the governor filed paperwork this morning to launch a statewide recall effort. Organizers will have 60 days to collect the over 540,000 signatures needed to recall Walker.

The governor says he’s relying on his record over the past year as the reason why Wisconsinites should not sign a recall petition. He believes that’s what he will be judged on either next year or when he’s up for reelection in 2014. Walker says “no matter what else is going on, it’s not going to take our eye off that focus.”

Walker says those asked to sign a petition should also consider the impact a second round of recall elections will have on the state, following recalls in the state Senate over the summer. He believes many people do not want to see another election cycle taking the focus away from job creation, along with the millions of dollars that will be spent on political advertising.

However, Walker admits there are still many people committed to recalling him from office and reversing the course of the last election. He says that will not take his focus off of the promises he campaigned on and he will continue doing the work he was elected to do.