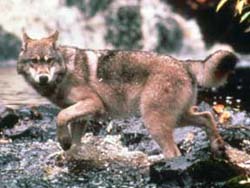 Wisconsin will soon be able to take a more active role in managing the state’s gray wolf population. Federal officials have announced plans to remove endangered species protections for the gray wolf.

State Department of Natural Resources Secretary Cathy Stepp says the move will give state the power to more effectively deal with problem animals. The delisting will allow the agency to issue permits for killing or trapping wolves that are attacking livestock or pets on or near their property.

Wisconsin’s gray wolf population is estimated at around 800 animals, although Stepp says the DNR’s population goal is about 350 wolves. For now, she says the agency will only focus on removing animals that are a danger to property. However, she says there are chances a hunting season could be considered “down the road.”

Governor Scott Walker has directed the DNR to implement a wolf management plan by early next year.