You are here: Home / News / Ryan runner-up for Time honor 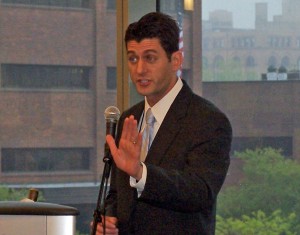 Wisconsin congressman Paul Ryan is a runner-up, for Time magazine’s annual honor. Perhaps he’s not quite as compelling as “The Protester,” who garnered the newsmagazine’s Person Of The Year honor, but Time‘s editors call the Janesville Republican “the most influential American politician,” giving the 41 year-old House Budget Committee chair kudos for “hard work, good timing and possibly suicidal guts,” in proposing his plan to “defuse the American debt bomb” – and for framing the debate in the 2012 presidential election.

Ryan, who’s represented the 1st Congressional District since 1998, was not available for an interview. but earlier this month he proposed legislation which would give the president line item veto authority over appropriations, to cut discretionary spending items out of bills and send them back to Congress for an up or down vote. “I think the American people are with us, I think they want to see the culture of spending changed,” he said. Many in his own party might want Ryan in the running for the GOP presidential nomination, but despite his high profile, Ryan took himself out of the running almost as soon as his name came up.