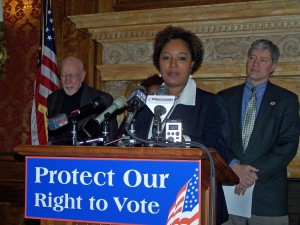 The U.S. Justice Department is being asked to review Wisconsin’s new voter photo ID law by 22 Democratic lawmakers. They want Attorney General Eric Holder to take a close look at the state’s restrictive new law, which they allege will infringe on the voting rights of minorities, senior citizens, students and the poor. “If he determined that there is a violation of the Voter Rights Act . . . the argument would be that he would be able to determine that our law is in violation” allowing the federal government to intervene, says Milwaukee Senator Lena Taylor.

The Wisconsin League of Women Voters has filed a lawsuit challenging the Voter Photo ID law. Holder is already looking at other states – in the South – for possible violations of the Voting Rights Act. Republican supporters of the law say it’s designed to cut down on voter fraud, although there’s never been much evidence for the claim. The chair of the Wisconsin Bar Association’s civil rights section also sent a letter on the topic to Holder, last August.