The Daytona 500 was supposed to be run on Sunday.  Rain delayed the start of 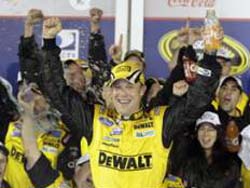 the race until the dinner hour on Monday night.  It finally finished in the early morning hours this morning and it was Cambridge, Wisconsin native Matt Kenseth that took the checkered flag.

It’s the second Daytona 500 win for Kenseth, who also won back in 2009.  He edged Dale Earnhardt Jr. to the finish line.

The race was delayed around 2-hours with about 40-laps to go when something broke on Juan Pablo Montoya’s car.  His car spun hard into a safety truck with the collision causing an instant explosion.  It took a couple of hours to clean up the mess.  Fortunately there were no injuries.