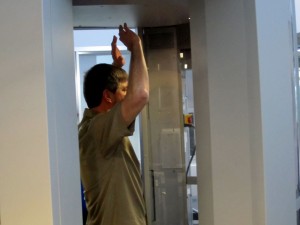 A scanner is used on a TSA employee. (PHOTO: Matt Lehman)

Another Wisconsin airport lands new security screening technology. The TSA began using millimeter wave advanced imaging technology at the Central Wisconsin Airport in Mosinee on Wednesday. The scanners bounce electromagnetic waves off the human body, creating a black and white image that can be used to detect hidden objects under clothing.

The scanners work differently than earlier versions of the technology, because the image they create is a generic one. Machines implemented at major airports previously drew fire because of the accurate image of a body they could generate.

John Stewart, who is the assistant federal security director for the TSA in northeastern Wisconsin, says the technology is perfectly safe and most passengers choose the scanners over a security pat down.

The TSA has 600 units in 140 airports around the country. It plans to deploy the technology at about two dozen airports over the coming weeks, including the Dane County Regional Airport in Madison.