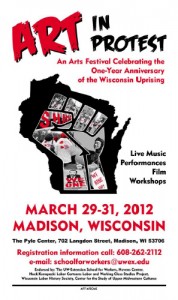 A Republican lawmaker who has an often contentious relationship with the University of Wisconsin has gotten the UW’s School for Workers to cancel an “Art in Protest” exhibit that had been scheduled for next month. “The problem with it is that it would be funded with taxpayer dollars and that’s through the Extension,” says Representative Steve Nass, who chairs the Assembly committee on colleges and universities. “If the unions want to fund it, I have no problem with that.”

Nass charges the exhibit would have provided a one-sided view of last year’s protests at the Capitol, with UW Extension taking the side of protesters. “I did indicate to Extension that if they go forward with the event, any problems that arise from that, or any misbehavior by the protectors – which I certainly would expect, it would probably be very despicable – Extension would take ownership of that, and I will be watching.”

The School for Workers decided to cancel the show. Nass says he’s never made any secret of his opposition to taxpayer funding for the school, which was founded in 1925.