You are here: Home / News / Falk wants to ‘reopen’ government 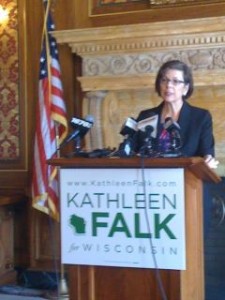 Kathleen Falk is pushing for transparency, with a long list of items, if elected governor. They include appointing a panel to develop a plan to increase open government, redistricting reform, posting budget information online, and reversing Voter ID.

“Making it more cumbersome for people to get that identification, and then the more cumbersome part of the process, discourages voters,” Falk said at a Tuesday news conference. (Her comments came before a judge issued a temporary injunction on the new law.)

“I will also ensure the Department of Administration, unlike Governor Walker’s, does not infringe on rights of assembly and speech in our state capitol,” said the former Dane County executive.

Also Tuesday, the Republican Party of Wisconsin issued a statement highlighting “union special-interest” spending in support of the Democrat Falk, who has been endorsed by WEAC and AFSCME.

“We knew it was only a matter of time until big government union bosses began going to bat for their hand-picked candidate Kathleen Falk, who has already stated she would hold the state’s budget hostage to the whims of the union groups behind this baseless recall,” GOP spokesman Ben Sparks said.

Earlier with reporters, Falk responded to the idea she was out to do the unions’ bidding, saying she is “very proud to stand with working men and women of the state.” Falk also claimed she’s received endorsements from every group that has backed a Walker opponent including Emily’s List, Clean Wisconsin Action Fund: “I’m proud of that breadth of support.”

State Senator Kathleen Vinehout and state Secretary of State Doug La Follette are other Democratic candidates running for governor. The date of a Democratic primary, and ensuing probable recall election of Governor Walker remains to be seen.