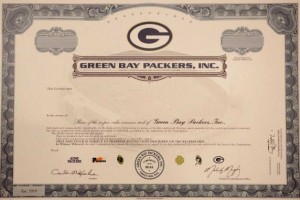 There are more than 268,000 new owners of the Green Bay Packers. The team has completed a stock offering that started at the beginning of December, with fans paying $250 a share. The effort raised $67 million to help fund a major expansion project at Lambeau Field.

Packers team president Mark Murphy says they were very pleased with how the stock sale went, which was originally only expected to raise about $25 million. He says the result will cover nearly half the cost of the $143 million renovation. Murphy says the project that will really benefit the organization and the community.

The expansion will add 6,600 seats at Lambeau Field, create a new gate at the north end zone, and put bigger scoreboards on both ends of the stadium. Thanks to a mild winter, Murphy says construction on the expansion is already well underway.

After the latest stock sale, there are now more than 360,000 Packers shareholders.