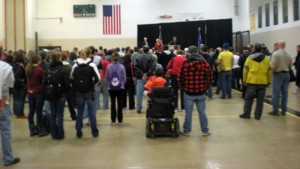 A relatively small crowd gathered at UW Oshkosh Friday for a Newt Gingrich rally. The Republican presidential candidate is running a distant third for the party’s nomination. Gingrich spoke to the crowd of about 200 at the Kolf Sports Center about using technology to crack down on illegal immigrants and fraud in the Medicare system. He used an example of the way shipping companies keep track of packages. “Why don’t we send a package to everyone who’s here illegally. And then when the package arrives, we’ll pull it up, we’ll know exactly where they are, and we’ll have identified all of them for about nine dollars apiece.”

Gingrich also talked about the importance of ramping up natural gas and oil drilling in the U.S. Gingrich says royalties from fossil fuels would help the country in the next several decades. Gingrich is making two more stops in Green Bay this afternoon. The poor turnout suggests Gingrich isn’t getting voters too excited about his campaign. He reportedly told a radio station in Milwaukee that he believes Mitt Romney will be the party’s nominee.