You are here: Home / News / Breske was smoking ban foe 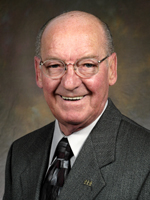 A former state lawmaker, known for his vocal opposition to the state’s smoking ban, has died. Roger Breske was not shy when it came to opposing the ban on indoor smoking. The popular northwoods Democrat slammed the ban during an impromptu Q-and-A, following a 2008 press conference designed to highlight economic development proposals from state Senate Democrats. “I think they’re sticking their noses into everything,” he said. “It’s seat belts, it’s helmets, you name it. Why does the government have to tell people what to do all the time? I just can’t believe this is what we’re here for,” he said. Reporters and lawmakers chuckled as Breske continued. “I was born and raised in a bar since I was that high, and I was tending bar since I was that high (holding hand four feet above the ground.) And there was only one light bulb in the bar. There was no fans, and everyone smoked. It was blue in there. Come on, I’m still alive, and I’m 69 years old. It’s sickening.”

Breske served in the state senate for 18 years, ending in 2008. That’s when then governor Jim Doyle tapped him as state railroad commissioner. Speculation at the time was that Doyle made that move to get the former Tavern League president out of office so that the smoking ban could be passed. Doyle signed the ban into law the following year, and Breske stepped down as railroad commissioner in 2010. Breske was 73.