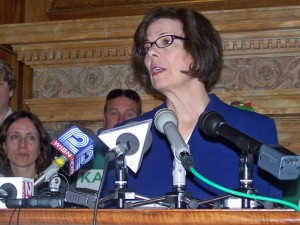 As Wisconsin prepares to pick a Democratic nominee to take on Governor Scott Walker in June’s recall race, one of those candidates is says her strong union ties will help her winning the race. Former Dane County Executive Kathleen Falk says she’s counting on her supporters in the several unions that have endorsed her to help win the upcoming primary and in the June 5th recall election against Governor Walker.

WEAC executive director Dan Burkhalter says they are doing what they can to get out the vote, with most members doing aggressive person-to-person contacts, phone calls, and mailers.

Arlyn Alverson with AFSCME says they have boots on the ground talking to union members, family members, and the public.

Leaders from several unions, environmental groups, and other political committees gathered at the Capitol Thursday to talk about how they plan to help Falk win the primary in less than two weeks. Falk says their support will be a key part of her campaign, as she begins traveling the state to reach out to voters.

Falk is also getting a boost from the group Wisconsin for Falk, which has announced it is spending more than one million dollars on advertising supporting her nomination.