You are here: Home / News / Protest candidates will appear on ballots (AUDIO) 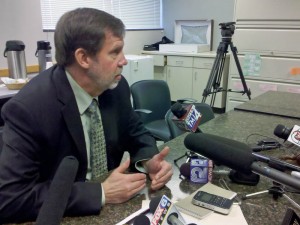 State election officials have voted to allow so-called “fake Democrats” to appear on the ballot in upcoming recall elections.

Republicans registered candidates to run as Democrats in each of the upcoming recalls against the governor, lieutenant governor, and four state senators. GOP officials have said the move ensures there will be primaries in each of the races and it gives incumbent Republicans more time to campaign.

Democrats challenged their inclusion on the ballot, with attorney Jeremy Levinson arguing the tactic amounts to election fraud. Levinson says the candidates knowingly filed false information with the Government Accountability Board indicating they are Democrats, even though they are clearly not members of the party.

Republican Party attorney Joe Olson countered that nomination papers are not about making an under oath declaring a party affiliation. He says Wisconsin’s open primary system allows candidates to run under whatever party they choose.

The GAB on Tuesday rejected the challenge and certified the ballots for the upcoming recalls. Agency director Kevin Kennedy says there are no laws that actually prevent the use of place holder candidates. He also echoed concerns from the board that trying to evaluate the political intentions of any candidate would be a dangerous precedent to set.

Levinson says an exception should have been made in this case though, since Republicans have made their plans very clear from the beginning. He says they will consider challenging the decision in court before the May 8th primary date.