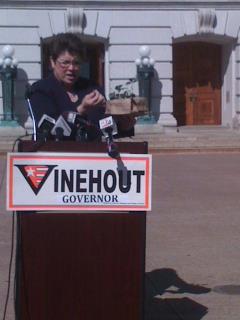 A Democrat running for governor rolls out a comprehensive economic development plan. At a news conference Tuesday, Kathleen Vinehout says her philosophy differs from Governor Walker and the Republicans’ approach which puts the public sector and private sector at odds with each other.

“If the soil is rich, the economy will grow,” says Vinehout, while holding a plant as an example of the government’s role in the economy. She cites Des Moines, Iowa, a city ranked two years ago by Forbes magazine as the best place to run a business and raise a family. Vinehout says the products of the public sector enriched the economy with good schools and an educated labor force.

If elected governor, Vinehout would propose an emergency school funding bill with the eventual goal of restoring the $1 billion cut from education in the last state budget.

Other elements of Vinehout’s plan include expansion of broadband access, increased transit opportunities and a tax system that does not favor certain business over others.

Among the four Democrats in the race, a recent survey from Public Policy Polling has Vinehout doing the worst when matched up with Governor Scott Walker. But the Alma lawmaker says she is the candidate who can win voters beyond the traditional Democratic base. She also looks forward to vigorous debates to contrast her with the other hopefuls.