You are here: Home / News / Big win for Barrett (AUDIO) 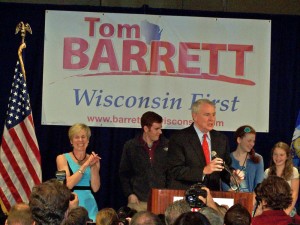 After claiming more than 58 percent of the vote in Tuesday’s recall primary election, Democratic nominee Tom Barrett quickly went on the attack against Governor Scott Walker during a victory rally in Milwaukee. Barrett accused Walker of dividing the state by pushing an agenda for the far right, creating an “ideological civil war” that has pitted residents of the state against one another. Barrett says he wants to end that conflict and heal the state by removing Walker from office.

Barrett criticized Governor Walker’s record on job creation, citing figures that show Wisconsin lost thousands of jobs over the past year. Barrett says “between March of 2011 and March of 2012, Wisconsin was the only state to lose jobs.”

The Milwaukee Mayor put the blame for those job losses on Walker’s pursuit of a conservative agenda and his focus on promoting those issues nationwide. Barrett says Walker is more concerned about being “a rock star for the far right” than he is about the future of Wisconsin.

The governor fired back against Barrett Tuesday night, after easily winning the Republican primary in the recall. Walker says the mayor wants to “take the state backward” and return Wisconsin to the days of double digit tax increases and out of control spending.

Barrett called on Democrats to unify behind him in the final four weeks leading up to the recall, saying their help will be needed to overcome Walker’s massive funding advantage. The governor raised $13 million in just the first few months of this year, although both candidates are likely to benefit from a great deal of spending by outside groups in the weeks ahead.

The result of Tuesday’s primary sets Wisconsin up for a rematch in the race for governor, after Barrett lost to Walker in the 2010 election. Voters will make their decision in the June 5th recall election.