You are here: Home / News / Molepske to run for DA 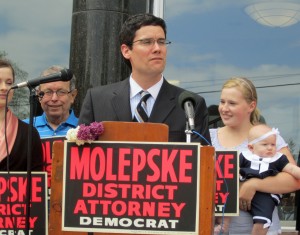 State Representative Louis Molepske Jr. will not seek re-election this fall. The Stevens Point Democrat wants to be the next district attorney of Portage County instead. The 38-year-old launched his new campaign Friday on the steps of the county courthouse. Voters first elected Molepske to the state Assembly during a special election in 2003. He was re-elected four times.

Molepske is a former assistant city attorney in Stevens Point and former special prosecutor in the county. Molepske said being a lawmaker during the Capitol budget protests last year has helped learn to listen to all sides.