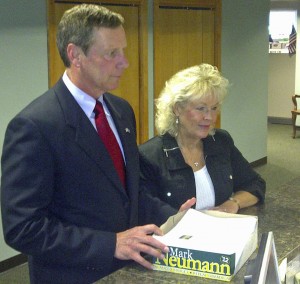 U.S. Senate candidate Mark Neumann has turned in his nominating signatures. The former Republican congressman dropped of the required signatures at the offices of the state Government Accountability Board. “We are here today to turn in our nomination papers to get on the ballot for the fall election to beat Tammy Baldwin and join Ron Johnson in fighting wasteful government spending,” said Neumann. Before he can do that, Neumann will need to defeat fellow Republicans, former Governor Tommy Thompson, Assembly Speaker Jeff Fitzgerald, and businessman Eric Hovde for a chance to fill the Senate seat being vacated by Democrat Herb Kohl. The primary winner will face congress woman Tammy Baldwin in November.

“We came out of convention with a very strong thrust forward,” said Neumann, referring to the first round of endorsement voting at the state Republican Party convention in Green Bay. Neumann was the top vote-getter with 42 percent, twice what Fitzgerald received. But in subsequent balloting, none of the four candidates received the sixty percent necessary to receive the nomination. “Remember, going into convention it was conventional wisdom that somebody else was going to get that nomination,” Neumann said.