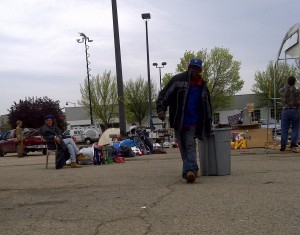 After months at a vacant car lot near downtown, the Occupy Madison encampment was dismantled on Tuesday. “Many volunteers came today to help assist the occupants to dismantle their site,” said Madison Central District Police Captain Carl Gloede. “It’s going very well today.” The move comes the day after a Dane County Judge rejected a request for an injunction on the city’s eviction deadline.

The encampment residents were almost entirely homeless. Luca Clementi, who’s worked with the residents, expressed disappointment with Mayor Paul Soglin’s decision to stick to the deadline. “What we wanted to do with the mayor was have a dialogue about how we might address this in a way that might be cooperative with the city, not in any defiance,” he said. “We met with absolutely hard line resistance, and it was obvious it was going to go anywhere.” Clementi predicted the homeless won’t be going anywhere, either – except back onto the streets downtown. “I really don’t believe there is anywhere to go,” he said, noting that many of the residents said felt safer in the encampment than in any of the city’s homeless shelters.