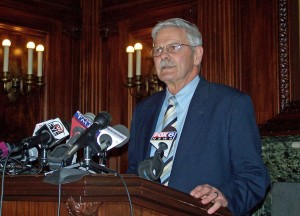 The apparent new Senate Majority Leader hopes meaningful changes are on the way at the Capitol.

With a narrow victory for John Lehman in the 21st Senate District, Democrats stand to gain a one seat majority in the chamber. If the election results hold, Monona Democrat Mark Miller will take over as Majority Leader of the Senate until after the next election.

Miller says he talked Wednesday with Governor Scott Walker and Republican leader Scott Fitzgerald (R-Juneau) about making the transition as smooth as possible. He says it’s a good thing for the people of Wisconsin to have a set of checks and balances by having Democrats in power in Senate. Republicans currently control of the Assembly.

Republican Senator Van Wanggaard (R-Racine) has not yet conceded the race and a recount is still possible, but Miller does not believe that will happen. With a margin of just over 800 votes, he believes even Republicans can admit that’s “a lot to try to make up in a recount.”

While the current session is over, Miller says he’s still hoping to address unfinished business before the year is over. He says they look forward to taking up the issues facing the state, such as job creation, and opening them up to the people of Wisconsin in “a way that has not happened so far” under Republicans. Miller says they plan to demonstrate why Democrats are the “right people” to be in power.