You are here: Home / News / Dems all in for Baldwin (AUDIO) 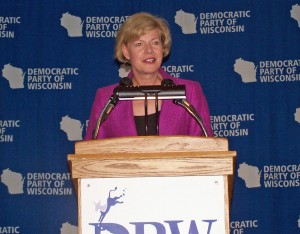 Wisconsin Democrats were building support for their headliner for November elections, as Congresswoman Tammy Baldwin makes her bid to succeed U.S. Senator Herb Kohl, who’s retiring at the end of his term. Baldwin is “somebody we can all easily believe in, stand up for, and that we all fight for,” said Kohl, who addressed the state party convention in Appleton on Saturday morning after Baldwin spoke Friday night.

Baldwin pledged to fight programs like Medicare and Social Security, which she says are threatened by her opponents. “So I say to Tommy, and Eric, and Jeff and Mark, these aren’t programs, these are promises. And these are promises we will not let you break.” 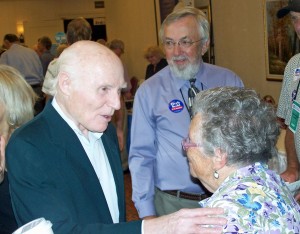 Baldwin will face the winner of the Republican primary in November – either former governor Tommy Thompson, former congressman Mark Neumann, Assembly Speaker Jeff Fitzgerald or businessman Eric Hovde. “Tommy Thompson, he’ll be fighting for his friends, Washington D.C. insiders and lobbyists who already have too much power and influence in Washington. Mark Neumann and Jeff Fitzgerald will fight for additional corporate tax cuts, instead of working to rebuild our manufacturing economy and creating jobs that can’t be outsourced to other countries. And is there any doubt who the hedge fund manager will be fighting for? Eric Hovde will fight to repeal Wall Street reforms, and return to the Bush-era policy of letting big banks write all their own rules.”

“Their idea of deficit reduction is shifting the burden to the middle class, to families and to seniors and to those who are struggling the most in Wisconsin,” said Baldwin. “They all support the Ryan Budget, which would end the guarantee of Medicare for future generations. while giving extreme tax cuts to the very wealthy.