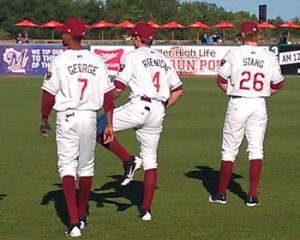 First Year Player Draft, baseball fans had visions of  seeing him playing for his father, Ron Roenicke at Miller Park one day.

Ron Roenicke has never coached his son on a baseball diamond, but the pressure to perform for Lance is still there.  Although Lance Roenicke admitted that he’s used to it by now.

Lance Roenicke said he talks to his dad quite a bit, but when it comes to advice about baseball, he usually calls his cousins.

Some will say Lance Roenicke is in the Milwaukee Brewers organization because his father is the manager of the Big League Club.  But Lance has proved deserving, hitting .310 with 4 home runs and 35 rbi’s his senior season at Cal-Santa Barbara.

Lance played 2-games in rookie ball before being quickly promoted to “A” ball with the Wisconsin Timber Rattlers.  He didn’t play last night as the Rattlers opened a home stand against Quad Cities, but he is off to a 2 for 4 start in 3-games.

Ron Roenicke says his son probably has a little more pop in his bat then he did as an 8-year major leaguer.  Now we’ll see if Lance Roenicke can climb his way up through the Brewers farm system and get his shot in the Major Leagues.